This egg yolk ravioli recipe is for the passionate home chefs! It’s a bit tricky and requires a lot of steps, but it’s totally worth the effort.

If there is one dish regular boring people (like Sophia) associate with high cuisine, it’s the egg yolk raviolo. She kept annoying Uri until he finally agreed to make some.

If there is one dish regular boring people (like Sophia) associate with high cuisine, it’s the egg yolk raviolo. She kept annoying Uri until he finally agreed to make some.

Uri’s first encounter with Egg yolk raviolo was as a teenager. When his older sister, who was a restaurant critic at the time, told about the most fantastic dish she’s ever had: a crab raviolo with a liquid egg yolk center. He never actually tried the original dish, but he immediately made his own version and played a bit with the recipe. First, it was mushrooms and egg, then, at one point, butternut squash and even lobster and white truffle for a fancy Sylvester party. But when Sophia mentioned it, it was time for a re-reinvention.

So, as usual with us, a last-minute improvisation turned into this simple fancy wonder.

We kinda got inspired by classic artichoke and spinach dips, but we made it way fancier. Artichoke inside and out, saffron pasta dough, wilted spinach for good measure. It’s everything a girl wants.
You can use this recipe as building blocks for a million different things. The pasta dough is infused with saffron, but you can get creative and try dried porcini instead. The braised artichokes can be seared and made into a beautiful salad (recipe coming soon). The artichoke cream can be used as a base in a fish dish or served cold with a nice tomato salad. So yes, it is a little more elaborate and fancy looking, but you can use whatever bit you want of it, and true happiness will come to you.

Have you tried the recipe? What do you think? Tell us in the comments below and make sure to follow us on TikTok and Instagram!

Not-Really-Ceviche With Kiwi And Green Almonds

Vegan Malabi With Rhubarb And Strawberries 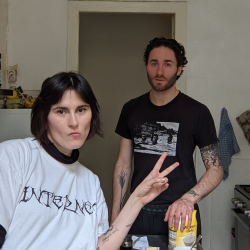 Hi! We are cheffy chef Uri Triest and food blogger Sophia Giesecke. Together, we are Shemesh Kitchen!

We use cookies on our website to give you the most relevant experience by remembering your preferences and repeat visits. By clicking “Accept All”, you consent to the use of ALL the cookies. However, you may visit "Cookie Settings" to provide a controlled consent.
Cookie SettingsAccept All
Manage consent

This website uses cookies to improve your experience while you navigate through the website. Out of these, the cookies that are categorized as necessary are stored on your browser as they are essential for the working of basic functionalities of the website. We also use third-party cookies that help us analyze and understand how you use this website. These cookies will be stored in your browser only with your consent. You also have the option to opt-out of these cookies. But opting out of some of these cookies may affect your browsing experience.
Necessary Always Enabled
Necessary cookies are absolutely essential for the website to function properly. These cookies ensure basic functionalities and security features of the website, anonymously.
Functional
Functional cookies help to perform certain functionalities like sharing the content of the website on social media platforms, collect feedbacks, and other third-party features.
Performance
Performance cookies are used to understand and analyze the key performance indexes of the website which helps in delivering a better user experience for the visitors.
Analytics
Analytical cookies are used to understand how visitors interact with the website. These cookies help provide information on metrics the number of visitors, bounce rate, traffic source, etc.
Advertisement
Advertisement cookies are used to provide visitors with relevant ads and marketing campaigns. These cookies track visitors across websites and collect information to provide customized ads.
Others
Other uncategorized cookies are those that are being analyzed and have not been classified into a category as yet.
SAVE & ACCEPT
Advertisements